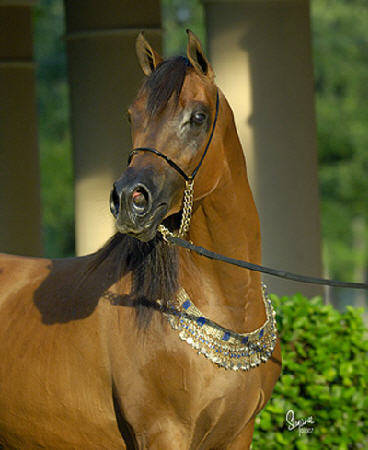 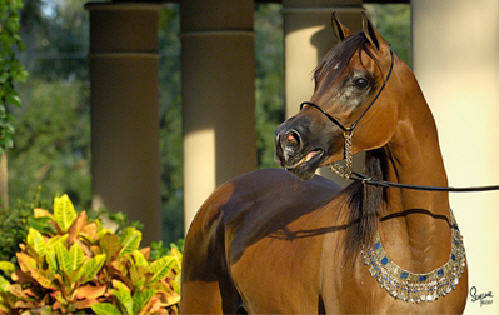 In Foal To
Expecting a 2016 foal by World Champion, QR Marc

Over a decade ago a very passionate Arabian horse enthusiast, Joel Demarteau, had a dream – to buy a great Arabian foundation mare .  A long time admirer of Bey Shah, Joel visited Southwind Arabians and Michael Wilson in Florida where he was overwhelmed walking through pastures full of incredible mares.  One mare – RGA Kouress caught his attention and won his heart.  Though not initially a huge fan of her sire Kouvay Bey, Joel was familiar with RGA Kouress’s dam line.  Angophora, Kouress’s dam, is sired by perhaps the most famous Polish sire – Eukaliptus. Eukaliptus was known to be a challenge to breed, but when bred to the right mares produced top quality get.  His daughters especially have achieved legendary status.

RGA Kouress’s dam line goes to the desert bred mare Rodania, and thus is the classic tail female strain Kuhaylan Rodania  – considered the original, “the ancient” Arabian desert horse and  tracing back to the Bint Rissala branch through the mare Kateefa (by Shahloul), dam of Alaa El Din, sired by *Nazeer.  Rodania is an extremely vital mare in straight Egyptian breeding.    Some of the greatest Straight Egyptian horses of all time including Alaa el Din, *Serenity Sonbolah, Al Adeed Al Shaqab, and Imperial Imdal are just a few examples of horses that carry the influence of Rodania in their pedigree.  What is extremely unique about RGA Kouress is that her great grand  grand dam’s sire Karoon, and her great grand dam’s dam Nesma are tail female to Rodania.  This is a very special and rare doubled concentration of Rodania blood in the tail female line and we believe the key pedigree ingredient to Kouress’s winning formula.

From a pedigree perspective – RGA Kouress was on paper the mare that Joel Demarteau dreamed of owning and there she appeared one day in a pasture before him – it was destiny.

In the show ring, Kouress showed herself to be a standout.  Joel showed her to a Championship win in AOTH mares at the Buckeye when she was in foal with then future World Champion colt Marajj.

While show ring wins are valuable, the true measure of an Arabian mare is her production record.  While Marajj certainly put RGA Kouress on the map, this was only the beginning of a long legacy of legends produced by Kouress.  Joel knew there was something more when the full sister to Marajj came the following year.  DL Marielle was incredibly beautiful when she was born, and grew into a beautiful young mare.  She is now proving herself as a production queen herself with her foals.  She is the dam of Kanz Albidayer by Ajman Moniscione.  Kanz was winning every show in the ME and now siring some incredible foals for his owners, Albidayer Stud.  Marajj’s other full sister is owned by Markelle Arabians and is just beginning her production career.  Only time will tell if she will be able to follow in the hoofprints of her brother Marajj and sister DL Marielle in terms of production record.

RGA Kouress foals are owned by breeders around the world.  We are certain you will be hearing about this incredible mare and her offspring for many years to come.